Conor’s brothers Brendan and Eamon prepared his message to teens living with NMD. 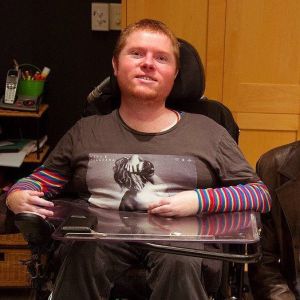 Conor Murphy named this research “My Life My Voice” in May 2014.

“I have a condition that affects my ability to kick a football, drive a car and take a crap like a normal person, but the sooner I accept that I need help to do some things, the sooner I can get over it and get on with the things I can do. My mind is active. I went to university and got a degree. I’ve had a girlfriend. I go to festivals. I have a job. I have mates over for drinks. I live in a house with a friend, not with my parents. Granted, I would have done none of these things if I had not had the support of my parents and family, but it took a certain amount of my own mental attitude too. A voice inside my head that said ‘You know what, I’m not going to let this control and define me. I may not be able to do everything an able bodied person can do, but I can do more in ways that many able bodied blokes can’t !!’ ”

Conor was an outgoing, witty young man who was in good health and fantastic wellbeing. He left a big gap when he was taken too soon in July 2014. He achieved more in his 25 years than many other able bodied people do in a lifetime. He played sport for his state, he was President of the sporting corporation he loved so much, he pioneered the introduction of new codes for the sporting association. He finished high school and was awarded a Bachelor degree from Murdoch University. He was involved in community activities. Scoring and writing reports for local sporting teams and advocating issues close to his heart. Issues such as the implementation for the National Disability Insurance Scheme. He spoke in parliament, attended an AFL Grand Final and travelled around Australia. He had a job he enjoyed as en Electoral Officer for Fremantle Federal MP Melissa Parke and attended Fremantle Football Club games as often as he could. His was a life full of achievements and activity. He had his down moments, but he truly made the most of the life he was given. Conor had so many different groups of friends, we are only finding out half the stuff he got up to now that he has passed away. Conor’s outlook on life was not ‘I can’t do that’ but ‘how can I do that’, and more often than not, he did it.