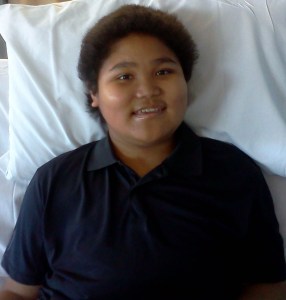 Ghaely was born in Honiara, Solomon Islands on 15th November 1998. He and his family migrated to Australia in 2006 and settled on Bribie Island just north of Brisbane, Queensland. Ghaely attended Banksia Beach State Primary School then, Bribie Island State High School where he reached year 11. He was officially diagnosed with Duchenne Muscular Dystrophy during 2009.

Since November 2015 Ghaely and his family have helped with the MyLifeMyVoice research through sharing his journey. His contribution is very valuable.

Ghaely passed away in relative peace in Lady Cilento Childrens Hospital on 19th November 2015 only 4 days after his 17th Birthday due to lung infection and ongoing respiratory complications associated with his disease. Ghaely has 3 younger sisters.